skip to main | skip to sidebar


A Double-Feature
Strange Fruit & More Than A Month 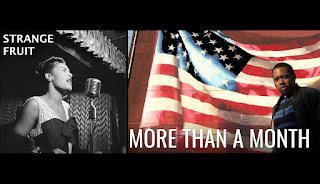 This screening is cosponsored by the:
Dallas Peace & Justice Center


February 4th
A Double Feature: Strange Fruit and More Than a Month

This screening is cosponsored by the
Dallas Peace & Justice Center

"Straightforward yet nuanced, ‘Strange Fruit’ tells a story that must be told. We know the importance of Billie Holiday's recording. But this indispensable video fills in the history binding the struggle against lynching and for black rights with a wealth of common history of African Americans, Jewish Americans, and the American Left. We need to learn this chapter in our past." -- Nell Irvin Painter, Princeton University

Strange Fruit is the first documentary exploring the history and legacy of the Billie Holiday classic. The song's evolution tells of America's radical past using one of the most influential protest songs. The saga brings viewers face to face with the terror of lynching as it spotlights the courage and heroism of those who fought for racial justice when to do so risked ostracism and livelihood if white - and death if Black. It examines the history of lynching, and the interplay of race, labor and the left, and popular culture that would give rise to the Civil Rights Movement.-- California Newsreel

"Southern trees bear a strange fruit
Blood on the leaves and blood at the root
Black body swinging in the Southern breeze
Strange fruit hanging from the poplar trees..."

From the filmmaker:
These are the opening words to one of the world's most famous protest songs. Its music and lyrics were written by Abel Meeropol (pen name Lewis Allan), a Bronx public school teacher — but are often attributed to Billie Holiday, who first sang "Strange Fruit" in 1939 at Barney Josephson's Café Society, New York's first integrated nightclub. The history of this anti-lynching song explores the alliance between American Jews and African-Americans in the struggle for civil rights.

You can watch the trailer here: https://youtu.be/q54Ss_93cRc

More Than A Month

From PBS/Independent Lens:
Shukree Hassan Tilghman, a 29-year-old African-American filmmaker, sets out on a cross-country campaign to end Black History Month. He stops in various cities, wearing a sandwich board, to solicit signatures on his petition to end the observance. He explains that relegating Black History Month to the coldest, shortest month of the year is an insult, and that black history is not separate from American history. Through this thoughtful and humorous journey, he explores what the treatment of history tells us about race and equality in a “post-racial” America.

His road trip begins in Washington, D.C., crisscrosses the country during Black History Month 2010, and ends with an epilogue one year later. Each stop along the journey explores Black History Month as it relates to four ideas: education, history, identity, and commercialism.

Tilgman’s campaign to end Black History Month is actually a provocative gambit to open a public conversation about the idea of ethnic heritage months, and whether relegating African American history to the shortest month of the year — and separating it from American history on the whole — denigrates the role of black people and black culture throughout American history. But it is also a seeker’s journey to reconcile his own conflicting feelings about his own identity, history, and convictions.

More Than a Month is not just about a yearly tradition, or history, or being black in America. It is about what it means to be an American, to fight for one’s rightful place in the American landscape, however unconventional the means, even at the risk of ridicule or misunderstanding. It is a film is about discovering oneself.
You can watch the trailer here: https://youtu.be/D88pK5XDkE0

Image of Billie Holiday: William P. Gottlieb [Public domain]
At 7:00pm on the First Tuesday of each month the UUCOC hosts free screenings of socially relevant films followed by a discussion of actions we can take.

Email ThisBlogThis!Share to TwitterShare to FacebookShare to Pinterest
Home